How To Cook Food Without Electricity

Home » Our Blogs » Food Issues » How To Cook Food Without Electricity

How Do You Cook Food Without Electricity?

It never seems to fail that right after some natural or man-made disaster, the power goes down and you are left ‘off the grid’. 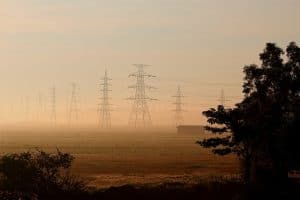 So how do you cook food without electricity?

In this post, we are going to reveal nine ways you may cook the food which is now going to spoil in that non-working fridge because you are now off the electrical grid.

Off The Grid Cooking— 9 Tips

Among the many problems that we will all face in an emergency situation is that of Off The Grid Cooking of our food.

That has happened to me many times

You now have to provide for yourself and family by investing in some new ideas about preparing all that food in a non-working fridge.

Everything from a simple fire pit to something called a ‘solar oven’ could be your answer to a major problem.

Today’s food preparation methods almost all require the use of electricity. Even people who have gas stoves might find that they can’t use them when an outage occurs as the gas may stop flowing.

About the only people who will be able to use their stoves are those who run off of propane; however, as long as they have gas, they’ll be okay.

Nevertheless, being able to master off the grid cooking will be important.

We can’t just stop cooking our food. In addition to making it warm and changing our food chemically, cooking is necessary to kill any unwanted bacteria in our food so that it can’t harm us. This is especially important for meats.

Barbecue Grill. Probably the most common form of cooking today, other than the stove, is with a basic grill. Most people have one for cooking the occasional steak or chicken.

I will always suggest to those who want to know: Buy a propane grill with one of those side burners. They are invaluable when you do not have electricity. Easy and convenient use to use, it is, in my opinion, a ‘no-brainer’ when it comes to a grill purchase.

Even if you are convinced you will never use it, you will definitely change your mind when the lights go out and you need a hot cup of coffee.

Grills also work best as replacement ovens in an off the grid-down situation.

You can even put pots on the grill top, although it may blacken them on the outside.

While most grills today work off of propane, you can still use them with charcoal or wood. This may damage the gas burner in the grill, but that really is not much of an issue, as it is replaceable.

Fire Pit. If you have a fire pit on your patio, you have another off the grid cooking solution that can work quite well. The only thing you might need that you don’t currently have is the metal grill to put over it. 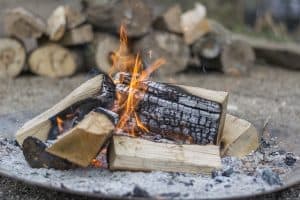 These are readily available in the same places that sell fire pits and grills.

To cook over a fire pit, like cooking over any wood fire, you have to allow the wood to burn down to the coals, which will be hotter but much less likely to burn the food that you put on the grill.

Fireplace. For over a century after the United States was first colonized, the most common method of cooking was in a fireplace.

They did not have to worry about “grids” back then!

Pots were either placed directly in the coals or suspended over the fire on a metal frame. Meats were broiled by putting them on a spit, much like we cook rotisserie chicken today.

Wood-Burning Stove. The wood-burning stove eventually replaced the fireplace as the most common cooking location and was still in use in the West even when most people in the East had stoves.

The top of the stove is flat, intended for cooking on. If you have a wood-burning stove for emergency heating of your home, you have a ready cooking method for anytime the grid goes down.

Camp Stove. By definition, camp stoves are intended for use where there is no electricity. There are three basic types, defined by the type of fuel they use.

Wood burning is basically just a portable box for you to put wood in and a pot on top.

Propane will be a problem when the sources run out. You also can’t use it effectively with wood.

Dual fuel is the old-style camp stoves that use either special fuel or gasoline. While gasoline may become scarce, this will probably be easier to find than those little green propane tanks.

Solar Oven. Solar cooking is wonderful, especially in the summer when you don’t want to heat up your home with fire.

The only drawback to it is that it cooks slowly, like a Crockpot. However, with a little practice, solar ovens are easy to use and effective and can be a good solution to off the grid cooking.

There are three different types.

The reflective box is the most common. You can make your own or buy one commercially. The oven consists of a box with flaps. The inside of all surfaces is coated with something highly reflective so that sunlight can be reflected on the pot when it’s placed inside the oven. You may increase the efficiency of these ovens by putting the pot in an oven bag, like those that are used for cooking a turkey.

Parabolic reflectors can be used, and the bigger, the better. Usually, these are made out of the old large satellite TV antennas, which are now obsolete. The inside surface of the antenna is coated with something reflective. When the pot is placed at the point of the antenna’s receiver, all of the sunlight is focused right on it. You will need to devise something to hold the pot in the right place.

Fresnel lens is the most powerful type of solar oven you can make. These are flat plastic magnifying glasses. Large Fresnel lenses were used behind the screen for older big-screen TVs and can harvest one out of a discarded set and build a frame for it. The focal point will be about two feet behind the lens. These are powerful enough that you can actually melt pennies with them.

So far, everything I’ve talked about is for pots and cooking meat.

However, you can use just about all of the methods I’ve mentioned for baking as well.

The Dutch oven was the way that colonists and pioneers baked.  I remember going on camping trips with my father and the first thing he would have my brother and I do was to gather stones for a Dutch Oven.

He would take our bread or pie and put it in the oven, which was made of those stones, and place coals in the bottom for fire. More coals would be piled on top. Surrounded by heat, the contents would then cook. This is also a good method for cooking food from scratch.

Then there is the most noted ready to use Dutch Oven (not quite as fun):

In an emergency such as having no electricity for cooking, there is always the alternative of ‘no-cook meal’ ideas.

Besides the lack of fire and heat is one less thing you need to worry about, you can focus the first few meals on using the food that is most likely to spoil first without refrigeration.

Here are a couple of easy recipes to get you going with some ideas.

Zucchini and Bean Salad With Bulgur

Place the bulgur in a separate large bowl. Add water to about 2″ over the beans, cover, and let stand until tender, 12-24 hours; drain.

Whisk together the oil, vinegar, ¾ teaspoon salt, and ¼ teaspoon pepper in a large bowl.

Add the zucchini, beans, shallot, almonds, and dill and toss to combine. Let stand, tossing occasionally, until the zucchini softens slightly, 10 to 15 minutes.

Serve the bulgur topped with the zucchini salad and sprinkled with the goat cheese.

In a medium bowl, combine the tuna, capers, 3 tablespoons of the oil, the vinegar, and ¼ teaspoon pepper.

In another bowl, combine the fennel, parsley, ¼ teaspoon each salt and pepper, and the remaining oil.

Cut the baguette in half lengthwise, then quarters or sixths crosswise. Divide among plates. Serve the tuna and fennel salads over the bread.

What was Learned On Off The Grid Cooking?

It’s a good idea to have more than one alternative for off the grid cooking methods available because anything can happen to render your primary method impossible to use.

Be sure to prepare beforehand, both to make sure you have several workable systems, and to practice cooking with it.

The last thing you need is to ruin a bunch of food when supplies are short! Better to make your mistakes when foodstuffs are in abundant supply.