Is A Food Shortage Coming Due To Panic?

Home » Our Blogs » Food Issues » Is A Food Shortage Coming Due To Panic?

A Possible Food Shortage And No Toilet Paper!

So I was walking through Walmart the other day and I noticed the toilet paper aisles were empty and the aisles containing canned foods were looking thinned out. I began to wonder are we were headed to a food shortage situation?

Along with paper products, can this country be facing a food shortage crisis? Well, the timing of my visit was during the beginnings of the Covid-19 pandemic and it so happens that panic buying begets panic buying. Much like a hurricane situation. And human nature leads us to over-prepare. People also resort to extremes when they hear conflicting stories. 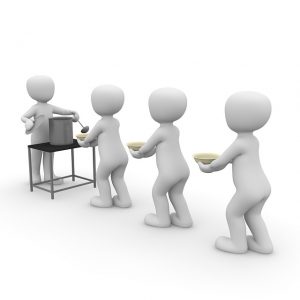 Along with the coronavirus outbreak, people are flocking to supermarkets not just in this country, but also worldwide – are they simply preparing, or irrationally panicking?

This pandemic, the coronavirus, scares the hell out of people because it’s new and not to well understood. Even experts do not agree on how severe this thing could possibly be. When people hear conflicting messages from all the news service providers about the risk it poses and how seriously they should prepare for it, they tend to resort to the extreme.

This reminds me of the panic that sets in during the prepping for a hurricane here in South Florida. Toilet paper and milk were flying off the shelves faster than I could imagine, and carbonated water shelves were just about empty.

It looks like a food shortage is also about to happen creating food issues due to personal panic and supermarkets being unprepared for something very few of us know anything about.

And all because of a pandemic scare from the Covid-19 strain.

As I mentioned above, people will resort to extremes when they hear conflicting messages. For the most part, it is all gloom and doom news. A sickness count and then a body count by city, state, and country.

And then the  Centers for Disease Control (CDC) issues a statement that “at-risk Americans to ‘take action’ by stocking up on food and medicine for the coronavirus”.

And then it starts.

Your neighbors are stockpiling everything from food to toilet paper. Forget the masks and hand sanitizers, they were gone weeks ago. What are you going to do? ‘Panic buying begets panic buying’. Last-minute emergency preparedness.

It’s natural to want to over-prepare, it allows you to come to feel a sense of control. For yourself and your family.

Before it goes beyond toilet paper and paper towels, let’s look into the question of a food shortage.

Main Causes Of A Food Shortage

This is not just an academic exercise; it’s one that will help you to see a food shortage as it develops – before it’s too late to gather up on some survival tips.

Unfortunately, you may have many opportunities to watch these common food shortage causes unfold such as with the current pandemic the world is faced with now.

Food and basic supply shortages are currently a reality affecting large parts of the world, including impoverished families in developed countries.

Greece, Spain, China, India, and Venezuela are just some of the countries where very large numbers of people are currently going hungry. But, hunger is coming closer and closer to home.

In the United States, nearly 50 million people are living with the uncertainty of not knowing when and where they will get their next meal.

What causes this widespread hunger?

Extreme weather is increasing in many parts of the world. Drought, in particular, has been a major player in food shortages during these early years of the 21st century. It is currently the most common reason for the food shortage.

Ethiopia, Somalia, Kenya, and Guatemala are just some of the countries currently suffering from several years’ long food crisis at the hands of drought.

Although the farmers in these countries are used to dealing with low levels of rainfall, often by selling off livestock, several consecutive years of drought have left their resources depleted.

A more common reason for hunger in all regions of the world is the economy.

Greek charities report that around 90% of the people in lower-class city neighborhoods are currently subsiding on food banks and soup kitchens.

The cause? The collapse of the Greek economy in 2009. Without jobs, it doesn’t matter that there is a food shortage; many people can no longer afford it anyway.

And when the poor are hungry, they are weak, more likely to fall ill, and less likely to be able to take action to get out of poverty and satiate their hunger.

Poverty is a self-perpetuating hunger cycle.

In the developing world, one of the main reasons for hunger is that the infrastructure needed to feed the hungry is not prioritized, or there are no funds for it.

There are not enough roads, silos, and warehouses. There is no infrastructure for getting water to the crops.

This either raises the costs of the food produced beyond what people can pay, or it means that the food does not get to the people regardless of what they are willing to pay.

At its worst, it means that food is produced but spoils. An ‘end game’ to a food shortage.

This is a major problem for many developing countries; yet their governments continue to spend money on urban developments.

Because the farmers cannot sell their food, they cannot grow more, and so a downward spiral begins.

This world is rife with unsound farming practices causing food issues. Deforestation, overgrazing, and over-cropping are just a few of the problems the environment faces.

We poison our water with fertilizers, and we kill all of the pollinators with insecticides so that our crops won’t grow in the future.

We leave our fields bare in the winter winds, leading to large soil losses, and we spread the human waste on food crops, introducing diseases into our soil.

We plow and we spray so much that nothing lives in the soil, and the only way to make it fertile again is to poison our water with more chemical fertilizers.

Never mind how we are patenting modified seed so that farmers in developing countries can’t save seed from year to year but have to plunge into financial ruin and go hungry themselves.

Don’t get me wrong; I love the countryside and have great respect for farmers. It is really good out there!

However, there are also widespread bad practices, even in the developed world. Farmers are often forced into these practices by government subsidies and regulations.

In many parts of the world, the soil is simply dying. There is nothing left for it to give – until, of course, we start taking better care of it.

Lastly, war situations continue to be the main reason for hunger and food shortages in the 21st century.

Unlike during World War II, when food imports were cut off and supplies had to be saved for the troops, war-based food crises today are often more acute.

Many of the current armed conflicts are displacing millions of refugees. These refugees need to be fed, and the regions giving them refuge cannot feed all of those new hungry mouths.

It’s not because those regions aren’t normally perfectly well-equipped to feed their people. There are just, very suddenly, too many of them to feed.

Well we come full circle on the topic. You are seeing right before your eyes such as the empty shelves at the neighborhood market what panic can do. It’s best to do some survival planning well before the CDC makes a comment or three.

Emergency preparedness is a thing to think about even when there is no need to think about it. It is just common sense to have some “extras” in the house at all times. Before the floods, hurricanes, and pandemics are at our doorsteps.

There you have it, and that is not even getting into the postulated reasons for coming food crises, such as global climate change. But it’s a good start to understanding why so many have food issues now and also lacking the supplies and why your family might go without food and supplies in the future.