Bartering Skills And Supplies For Survival

Life Skills And Supplies For Bartering

You got yourself ready for a potential disaster and then it happens. 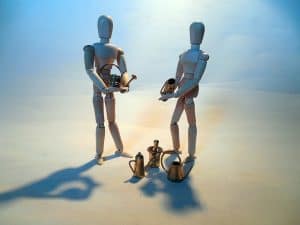 Regardless of what kind of disaster, hurricane, flood, fire, or some kind of economic collapse, all that prepping may not be enough for a prolonged tragedy. Or you might have forgotten something to put in that prep bag and the shelves are bare in the stores or they are not even there anymore, much less opened.

What are you going to do to make up for that shortage?

The answer to that question is relatively easy, for you see your neighbors are most likely to be needing something they have forgotten to prepare for.

In fact, they are most likely more in need due to the fact they have not prepared as you have.

A lot of times in a need to have situation, the goods you have in your house can be more valuable than cash or credit cards.

If the stores in your city are not open or if they are open with empty shelves, what kind of buying power are you going to have with all that cash and credit?

While bartering is not as convenient as using cash, you don’t have to worry about the needed goods losing their value.

In fact, some needed goods will actually gain in value, offering the opportunity to make a profit off the situation. Just remember that you are most likely going to be needing things too, so it will not always be a ‘make money’ situation.

However, in order to take advantage of the situation, you have to have a stock of trade goods available to you that you can trade for other things of which you need or you know are going to need in a day or two, or three, or four.

13 Most Valuable Items For Bartering

You can trade your barter supplies for other items your family needs or for things that will regain their value when the situation returns to normal.

During World War II, people in occupied Europe traded silver, jewelry, and other valuables to farmers out in the country for food. After the war, those farmers were able to sell those items for a tidy profit.

Be careful about how you do your business. You don’t want to let people know how much you have in your storeroom. If you let them know, you could open yourself up to attack.

Desperate people do desperate things, and you don’t want to become a target.

Useful Skills You Can Barter in a Crisis

It is not always about the things you can hold in your hands and store in the basement.

When most people think about bartering, they limit themselves to thinking about what goods they can give away. That’s fine as far as it goes, but there is an inherent risk in bartering goods in a crisis situation.

That is that others might get the idea that you have something they need and decide to try to steal it from you.

On the other hand, you can barter skills just as well as you can barter goods. While bartering goods may invite attack and cost you supplies, in the long run, bartering your skills may make you valuable enough to the community that nobody would think of attacking you.

Instead, they will want to protect you so that they can continually benefit from your skills.

Of course, being able to barter skills requires having skills that people will need during the crisis.

10 Survival Skills You May Barter After A Crisis

Survival Of The Best Prepared

Any skill you and your family needs will be needed by others as well.

Keep that in mind as you prepare yourself, and you will see opportunities to leverage those skills. It is possible that the crisis may eliminate your current job, and in that case, your skills in other areas may develop into a business that you can use to support your family as society rebuilds itself.

If the skills you are going to use require some sort of special materials or supplies, then it would be good to put in a stock of supplies as well. You can’t put in a whole auto parts store in your garage, but you can put in a stock of the most common items you’ll need.

Immediately after the crisis hits, supply chains may be cut. That stockpile will give you something to start working with while you are waiting for the supply lines to be reformed.

That will provide you with the opportunity of putting your skills to work immediately, rather than having to wait until materials are available.

Bartering In A Collapsed Economy

One of the greatest risks many developed countries face today is that of a financial crash.

Could that happen to us?

When many talk about this eventuality, they point to various indicators in today’s economy and global markets. Based on those indicators, some say society is well on its way to a complete fiscal breakdown.

There are certain telltale signs of these financial crises, as we can see by looking at others around the globe. Amongst them is runaway inflation as a nation’s money plummets in value.

When that happens, one of the ways that people deal with it is to return to a barter economy, rather than using money as their means of exchange.

Always keep that in mind.